Posted at 17:59h in General by devtelx 0 Comments
2 Likes

The last few years have seen a rather large increase in virus attacks. You may be aware of this fact and have taken steps to inform yourself to recognize these attacks. If so, then great as you won’t be as vulnerable as your typical “uneducated” user might be. If not, then educating yourself now can be imperative to the safety of your computer and it’s data. 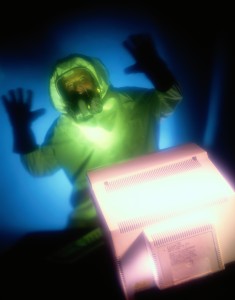 Computer viruses can be very expensive to resolve. Not only can the repair time be extensive, so can the damages. A major loss in your data should be expected. And in today’s world, living without a computer is akin to living without a limb, it just does not work. By staying abreast of the signs to look for, you will be staying one step ahead of a virus attack on your computer.

As an IT company, we want to help educate all technology users of the dangers computer virus’ can have on a system, which is why we put together some tips and advice on preventing a computer virus.

So to begin with, here is what you could call the first line of defense in keeping your computer clean of viruses.

Ultimately, YOU are the first line of defense in keeping your computer clean of viruses.

Virus software is getting cleverer as the years roll. We are at a point where users are presented screens that resemble common used antivirus software. These screens are created by a user’s Internet Browser which resembles either websites or antivirus software for Windows. They will usually ask the user to download the latest antivirus software or even alert that a computer virus has already taken over and needs to be cleaned up. If the user clicks on any of the options presented by the fake this antivirus, the program downloads the actual virus or spyware code, thus infecting the computer and rendering it useless in many cases

Being an informed user will help you keep your computer clean of any virus attacks. One way is to stay familiar with the real antivirus software or protection installed on the PC. Users will either see either a Symantec Antivirus product or a Microsoft Security Essentials antivirus on their machines. Other common antivirus programs include:

If you know your computer is already being protected than you will know those pop-ups saying the computer is infected is a lie.

Keep in mind that most antivirus software will just display a simple screen letting you know that they have blocked a possible infection and let you decide what to do with it. Real anti-virus pop-up windows won’t usually display the dramatic messages displayed by fake antivirus software. For example:
“Your computer is at risk and has been infected; download this software now to fix it”.

The next time you are browsing the web and suddenly receive pop ups displaying some sort of Antivirus Dashboard that starts “scanning” for infected files or prompts you to download Antivirus Software, you now know this is a fake scan. Also keep in mind, these pages would not have access to your computer, so how would they even know if your computer is infected or not!?

If you think your computer might be infected or you downloaded something that may have been malicious, immediately stop using the computer and turn it off. If this happens you should contact a reliable IT service to take a look and clean any viruses that may be running loose on your PC.

IT security, Miami IT services